Our spare room is a little bit of everything. it's an office with a desk & computer. It's a guest room with a full-size bed. Unfortuantely, it's also purgatory for things that have no other proper place to go in the house. Although I wish the room was far less cluttered than it is, it's probably better to clutter one room and spare the others.

This morning, I was trying to de-clutter a bit and found some old notebooks. So, of course I couldn't just stack them up and put them on a shelf or throw them away. I had to flip through them to see what gems I might find inside. (This is why it always took me sooooo long as a kid to clean my room. I couldn't just clean. I had to sort, read & analyze everything. I'm better than I was as a kid, but I still have room for improvement.)

Among the pages of one of my reporter's notebooks, I found this:

"We fill the gaps of other people with our own insecurities."

Ain't that the truth? I've certainly been guilty of that myself a time or two (or a hundred). However, as I've narrowed the pool of voices that I trust over the last several years, I think this is one particular trait I've improved on greatly. Howewver, promoting at work has allowed me to see how big of an issue it is for others. It has become intereresting to see how many people who constantly have negative feedback do so because their subconscious is looking in a mirror.

Looks to me someone at Office Depot should have tapped "Ctrl+Shift + >" a few more times on that word mark... Or maybe someone really believed the guy when what he described as six inches was really only three.

"There is no witness so dreadful, no accuser so terrible as the conscience that dwells in the heart of every man." -- Polybius

You've got your ball, you've got your chain
tied to me tight, tie me up again
Whose got their claws in you my friend
Into your heart I'll beat again
Sweet like candy to my soul
Sweet you rock and sweet you roll
Lost for you I'm so lost for you
You come crash into me
And I come into you

Time for a nap.

So I was bored.

One of my Facebook friends took a brain quiz.

I clicked the link.

This was the result. 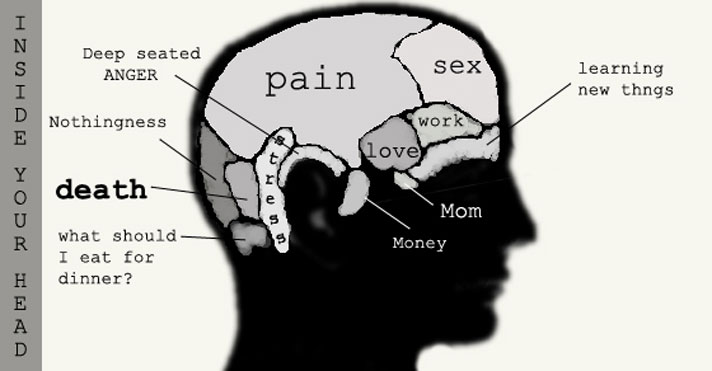 A couple of weeks ago, I came in from work and decided that something had to be done with our computer room. We call it the computer room because it's where the computer is and because "the 'where everything goes to die' room" is entirely too wordy. So, I spent about 12 hours sorting, filing, shredding and trashing. I should have weighed the stacks of papers that went into the trash and recycling.

Of course, not everything that had accumulated was trash. I found a few gems along the way, like an envelope with this scribbled on the back:

"I didn't think I could have a relationship with Jessie without dating others first. And I couldn't legitimately date others because I had Jessie in the back of my mind. This is one of my regrets."

That original sentiment reminds me of a quote from the movie High Fidelity (which is quite autobiographical for me despite the fact that I've never owned a record shop):


"I can see now I never really committed to Laura. I always had one foot out the door, and that prevented me from doing a lot of things, like thinking about my future and... I guess it made more sense to commit to nothing, keep my options open. And that's suicide. By tiny, tiny increments."

I preach the "no regrets" philosophy to others. I do my best to live it myself. But like Sinatra, I've had a few. Without stopping to think of any one specific regret, I'd bet you $500 that every single one of them can be traced back to a lack of commitment in some form or the other.

The bad news? I've screwed some things up along the way. The good news? I know why. I like to think that puts me ahead of the game.

89 degrees at 9 pm with air so heavy and still you can drink it. Driving through an undeveloped darkness -- night as it was originally intended. The black of night consumes the glow of the headlights and the world relies on the bright green glow of the dashboard and flashes of heat lightning on the horizon for illumination. The hum of the tires on the asphalt is overpowered by the rain-like cadence of bugs dying on the windshield. This is a summer night in The South.

I always knew the Griswold family had "the hap, hap, happiest Christmas since Bing Crosby tap-danced with Danny fucking Kaye." But until tonight, I didn't really have a benchmark for that sort of happiness. Thanks to Netflix, I can now check "White Christmas" off my list of movies to watch. It wasn't too bad... for a singing picture.

Posted via LiveJournal app for iPad.

gracegiver posted this meme and I thought I'd play along... if only to get something fresh in this space.

-- What is your LiveJournal username? How did you come up with it?

Fletch31526 - Part of my name and the title to the best Chevy Chase movie ever made along with a five numbers of significance to me. (Fletch, ThomasFletcher, TheFletch, et al were already taken.)

-- Have you renamed before? If so, what were your old names? If you haven't renamed, what names would you want to rename to?

This is my first and only. After this long, I can think of a few reasons to pull the plug, but not to rename.


-- How much does your userinfo say about you?

The gist of my bio has been the same for several years, but it gives a pretty good overview of who I am and what folks might get out my writing -- if I did, in fact, do any writing here anymore.

-- How long have you been on LiveJournal

I joined up on July 12, 2001 although I'd been reading a couple of folks here before that. I was about 10 months too late to be an early adopter.


-- What is the longest amount of time you've gone without posting?

In the very early days, I posted nearly every day. Then every week. Then a few times a month. Over the last couple of years, I've had one and two month stretches with nothing. I always say I'm going to fix that... but so far, it hasn't happened. One of these days...

-- On average, how many entries do you post per day?

-- What are your posts normally about?

-- Is your LiveJournal friends only? Why or why not?

I have 100-some-odd public entries. Some are public because they reveal nothing important. Some are left public intentionally for people I know from real life who peek in on my online life from time to time. Anything revealing is marked as friends only. All of the entries used to be public in the early days... but I was discovered by an associate in college who decided to share a few things he read. That moved me underground. Of course, now that I'm underground... I never reveal anything about myself. Go figure.

-- Does your LiveJournal have an actual title or are you merely USER @ LiveJournal?

It's called "Between Deadlines" because my "real" journal was titled "Deadline Pressure." You think I'm absent from LiveJournal? The real journal is practically abandoned.

-- How long do you see yourself staying on LiveJournal?

Considering how much I've written here, I imagine I'm here forever -- or until they go bankrupt and the place shuts down.

My "service engine soon" icon is the oldest one I still have saved to LJ. It probably dates back to late 2001 or early 2002. The light itself was such a common sight in an old truck of mine that I only worried when the light went off. I created it as a LJ icon for entries where things weren't right in the world -- which was a lot of the time back then.